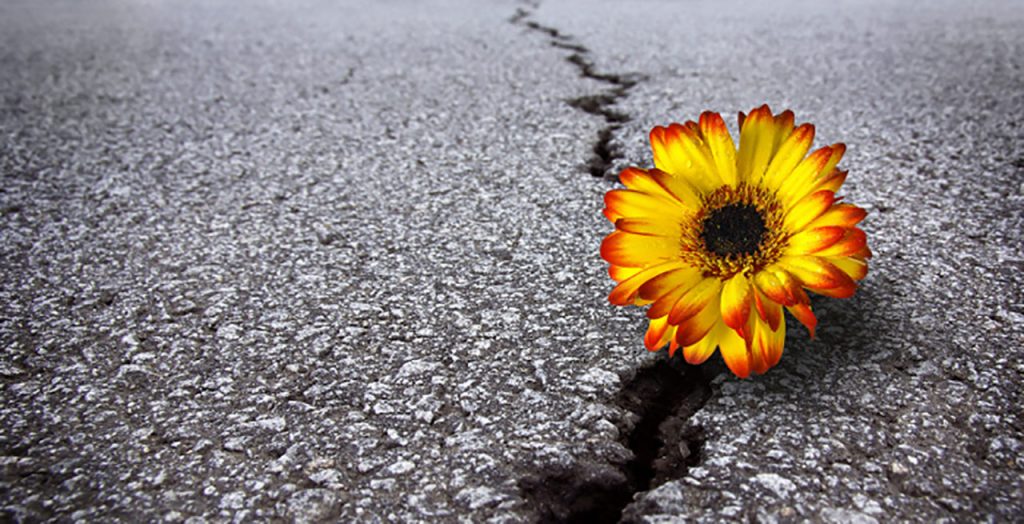 Mark Sayers is senior pastor of Red Church in Melbourne, Australia. His latest book is Disappearing Church. This article appeared in the July/August 2016 edition of Christianity Today.

The red pantsuit and matching sparkling eyeshadow were flashy, to be sure. But her delivery of “The Star Spangled Banner” was technically proficient and comparatively orthodox, right in line with the artist who, 15 months earlier, had released an album of jazz standards with Tony Bennett. As Lady Gaga sang, military jets flew overhead; a remote shot showed American forces standing at attention at a base in Afghanistan. It was US civil religion at its most familiar – and most strange.

In this context, Lady Gaga’s Super Bowl performance, superficially so unremarkable, in fact was one of the most dislocating and disturbing moments of her career. How does Lady Gaga’s vision of inclusion align with the realities of war symbolized by the military personnel who surrounded her? How does her vision of transgression live alongside the big business interests that funded the show?

At least since the carnivals of medieval Europe, down to the excesses of modern day Mardi Gras in the heart of the Bible Belt South, Western culture has tolerated the occasional transgressive display as a sort of release valve from the pressure of cultural order. But Lady Gaga’s ambition, as social critic Camille Paglia has noted, is to be simultaneously wildly transgressive and also mainstream. Coverage of the four person orgy in which she appeared was dominated by assurances from her fellow actors of how “confident,” competent, and urbane the whole process was, with the naked, fake blood soaked cast discussing what they would eat for lunch between takes – as if to reassure readers that, for all the outrageous content, the real people involved were utterly bourgeois, just like you and me.

Lady Gaga’s anthem marks the moment when Western culture ceased to be either conservative or progressive. It marks the moment when the decision makers who shape our cultural spectacles gave up on even making the distinction between those two options. And, of note for Christian leaders, it also marks the fast approaching end of churches’ ability to use “cultural relevance” as a successful strategy for growth and survival.

The roots of cultural relevance as a Christian strategy are long and deep. In some ways they go all the way back to Paul’s careful attention to the idols of Athens and the poets of the Greco-Roman world (Acts 17). More recently, at least in the West, the church has often assumed that its travails are due at least in part to culture. Therefore, many Christian leaders have tried to reduce the cultural distance between believer and unbeliever, primarily through reshaping structures, language, and aesthetics to better suit prevailing mores. See, for example, the churches in every major Western city and suburb where pastors and worship leaders are indistinguishable in dress and manner from their secular counterparts – except that they talk a lot about Jesus.

Today, of course, there’s the question of which culture the church should be relevant to. Should the church aim to make traditional values relevant again – small town ethics, moral restraint, respect for authority and received wisdom, frugality? Or contemporary values, revolving around cosmopolitan tastes, social reform, less binding commitments, and especially, unshackled sexual freedom? Aim for traditional values, and cultural relevance will require either creating a traditional subculture or “winning the culture back.” Set your course by contemporary values, and the task will be to adapt to a new age of progressive values.

But as Lady Gaga understands, real cultural power today flows to those who are so infinitely flexible that they can inhabit, co-opt, and subvert any set of values. Too many Christians imagine modern-day culture as an old school World War 11 movie, a colossal frontal battle between two clear enemies, good and evil. Even those who would retreat into a traditional subculture imagine that a war of sorts has been lost. If we are in a culture war, however, it is much more akin to the war in Syria – a confusing, fractious conflict. Understanding this complexity and contradiction is crucial for the Western church to fulfill its mission.

The 20th century sociologist Daniel Bell thought the cultural struggle between traditional and liberal values ended with the defeat of Prohibition, which he saw as traditionalism’s last stand. (Bell, of course, lived too early to imagine that same sex marriage would be declared not just legal but culturally normative.) But now there is a new struggle between liberalism and a more radical progressivism.

The liberalism that defeated traditionalism in the 1960’s and ’70s sought to reform yet maintain the existing order of the West. Think of the Kennedy Center for the Arts, opened in 1971 in Washington, DC, at the height of conventional liberalism and named for America’s most celebrated conventional liberal. It’s very first performance was Leonard Bernstein’s sprawling and chaotic Mass. But in its first years, it also hosted impeccably classical performances from the likes of the Chicago Symphony Orchestra and the Bolshoi Ballet.

The new progressivism, however, wants to scorch far more earth. The new progressivism doesn’t just see social norms, institutions, and authorities as in need of reform – being made more fair and tolerant of individual difference – but as inherently flawed and oppressive. To reach the noble goal of the elimination of oppression, violence, and discrimination, far more drastic tactics are needed than the old liberalism would ever have employed. Language, symbols, and forms must be subverted and reshaped.

The new progressivism sees as a form of social injustice a failure to recognize a person’s self-determined identity. Coupled with a deep seated belief in the emotional fragility of human beings, and therefore in the irrevocable damage that can be wrought by words and opinions, this form of progressivism turns the most mundane of human interactions into a potential minefield of conflicts and offenses. In the emerging battle between liberalism and progressivism, a feminist professor who had been on the furthest reaches of the Left can find herself cast in the role of oppressor for insisting on differences between men’s and women’s experiences in hookup culture.

The emerging progressivism has tapped into a long repressed desire, particularly in the young, for a radically different and better future. In the new progressive cultural mood, Catholic writer Jody Bottum sees a facsimile of Christianity, in which the categories of sin, shame, guilt, salvation, and the elect return, shaped around not theology but the goals of progressive politics.

The Rise of the Third Culture

Every missionary tries to build cultural bridges in order to communicate the gospel. But the new progressivism subverts and frustrates this search.

It is precisely the church, after all, that progressivism judges as immoral and sinful. The new progressivism is ultimately a form of post-Christianity. It is a new faith that attempts to achieve some of the social goals of Christianity especially the elimination of oppression, violence, and discrimination -while moving decisively beyond it. For many young adults, leaving the church is less a leap into apostasy than a step toward social aspirations the church imperfectly realized, while subtracting dubious religious restrictions and the submission of the individual will.

The sociologist Philip Rieff divided cultures into three types. First cultures believe in fate, many gods, taboos, and spiritual forces. Second cultures emerge from scriptural codes, are monotheistic, and believe in a rational, sacred order. From this order they derive commandments and prohibitions for human and creational flourishing. In a second culture, the individual finds meaning and security in obeying God and submitting to him.

The missionary movement evolved out of exchanges between a second culture Western Christianity and first cultures, such as the Greco-Roman world implied in Acts 17. But the current progressivism is not just a new paganism, a kind of first culture reborn. As Rieff saw, the contemporary West is evolving into a third culture, a culture that defines itself primarily against the second culture from which it has emerged. Its energy is spent deconstructing inherited sacred orders and traditions. All authorities are undermined and relocated in individual will and expression.

In such an environment, cultural relevance becomes an impossible task, as all cultural bridges are deconstructed, all symbols subverted, and all stories contested. When second cultures try to evangelize first cultures, the danger is that they will colonize them – not only preach the truth of the gospel but also insist on the acceptance of their own cultural preferences. The technological and imperial power that accompanied missionaries of the colonial era made colonization a far too frequent companion of gospel proclamation.

But for now and the foreseeable future, the technological and imperial power is on the side of the third culture. Under these conditions, when a second culture attempts to evangelize a third culture, it is the second culture that is most likely to be colonized.

At moments of great outside pressure throughout church history, we find spiritual movements, churches, and disciples who valued not so much cultural relevance as resilience. In its infancy, the church embodied resilience in the face of state sponsored violence under Rome. As the Christianized Roman world of late antiquity developed a thirst for esoteric and heretical streams of faith, the church held to the theological resilience of orthodoxy. As Roman civilization fragmented and fell, Augustine’s teachings and Benedict’s monastic orders provided models of resilient faith in the face of cultural collapse. Over the centuries, Christian leaders – or at least those whom we now see were most faithful and courageous – have modelled resilience in the face of communism, radicalized Islam, fascism, and even the syncretistic Christianity that emerged in apartheid-era South Africa or segregationist America.

The contemporary West will demand the same kind of Christian resilience, but in a new key. The third culture makes a paradoxical promise of personal freedom and social healing through unbounded transgression, eating away at the commitments, creeds, and confessions of Christianity and offering in their place technological abundance, consumer choice, and secular virtues. Resilience amid the third culture will require the patient and unyielding demonstration of human flourishing, the kind that comes only from embedding our personal freedoms in Christian commitments.

The first Christians called this “The Way”: an overriding commitment to church and Christian community, seeking to follow Jesus with the entirety of one’s heart, soul, and mind in the face of endless choices and options. The commitment to surrender one’s will to God, sacrificially following him as a servant. The decision to live fully with the Holy Spirit’s guidance in a world of anxiety, fragility, and emotionalism run wild. Such Christian resilience is growing stranger by the day, yet as it becomes rarer it becomes more valuable. Its strangeness will shine, pointing the way to a different future.

For all its progressive claims of moving society forward, the third culture can imagine a utopia only in the negative. Its future is merely emptied of sin rather than built on virtue, let alone relationship with God. The third culture is hell-bent on undermining the wisdom and institutions from which better futures are grown. Relevance to this culture will only make the church complicit in our contemporaries’ suicidal flight from restraint and, in the end, the Creator himself.

The third culture ultimately cannot deliver the utopia it seeks. True relevance to this culture will not come by accommodating its demands, but by developing the kinds of people who can resist them. If we can cultivate resilience rooted in the gospel, able to withstand even tremendous scorn and pressure, we may yet have a posture that will be effective for mission in the post Christian West once our neighbours’ impossible dreams of utopia without restraint come to their inevitable, disappointing end.